Now For Something Not All That Different 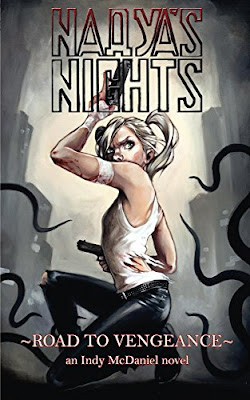 Hey, Slumgullibles. Indy McDaniel -- friend o' the Show, frequent guest, and author of the Nadya's Nights series (new volume coming soon) -- has started a YouTube channel with his lovely wife Brittany called Random Viewings, and as with The Slumgullion, the title is pure Truth in Advertising.

"It's random people watching random things and then talking about em," Indy told us. "Movies, TV shows, whatever. If we can watch it, we're gonna talk about it." And there's nothing you can do to stop them!

So, anyway, you should check it--

Okay, now it's just a threat. But I'd recommend giving it a look, if only because forewarned is forearmed.
Posted by Scott at 11:45 AM No comments:

Email ThisBlogThis!Share to TwitterShare to FacebookShare to Pinterest
Labels: Now a Word From Our Sponsor

"Remember After The Licking Scene...?"

What starts out as white-hot hatred for Francis Ford Coppola somehow turns into a spoiler filled, non-spoiler review of the new M. Night Shyamalan film, Split.

After Jeff and Mrs. C discuss their bi-weekly Boner, Scott and Jeff and joined by World O' Crap writer Hank Parmer for an in depth analysis of the metaphorical cannibal western horror comedy Ravenous, featuring performances that range from the inexcusable to the tripolar (and one that's actually good)

Now THESE Guys Are Gay

With Scott Clevenger, Mary Clevenger, and Jeff Holland; and featuring Indy McDaniel as The Storyteller.

Jeff gets depressed over the death of an icon. Scott cheers him up with a game. Jeff and Mrs. C get geeky over Bones and, in the UMC, Jeff and Scott look at two very early Lifetime films.

As promised and/or threatened in the Year End Special, we'll be posting a schedule of films for the Unknown Movie Challenge, so you may, if you're so inclined, bone up before the podcast. You can also go all multimedia on our asses and send in your own thoughts on the subject film. MP3s received before Thursday, January 12 will be played on this weekend's show. Emails will be read on the following episode. Send your musings, mullings, low comedy and high dudgeon to: theslumgullion@aol.com.

This week's UMC will be a twofer of hubris and homosexual subtext on the Leopold and Loeb killings -- Alfred Hitchcock's ROPE, with Jimmy Stewart and Farley Granger, and 1959's COMPULSION, with Dean Stockwell and Orson Welles. 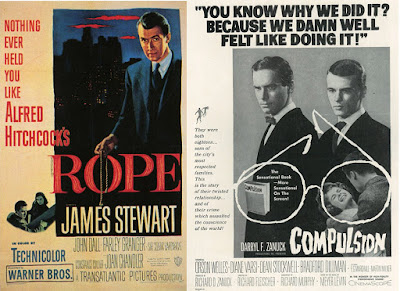 A more comprehensive list of upcoming films will be posted as soon as Jeff recovers from his kidnapping and transportation across state lines for immoral purposes.
Posted by Scott at 10:03 AM No comments: